The Rijksmuseum (Imperial Museum) is a Dutch national museum dedicated to arts and history in Amsterdam. The museum is located at the Museum Square in the borough Amsterdam South, close to the Van Gogh Museum, the Stedelijk Museum Amsterdam, and the Concertgebouw.

The Rijksmuseum was founded in The Hague in 1800 and moved to Amsterdam in 1808, where it was first located in the Royal Palace and later in the Trippenhuis. The current main building was designed by Pierre Cuypers and first opened its doors in 1885.

The museum has on display 8,000 objects of art and history, from their total collection of 1 million objects from the years 1200-2000, among which are some masterpieces by Rembrandt, Frans Hals, and Johannes Vermeer. The museum also has a small Asian collection which is on display in the Asian pavilion.

In 1805, the National Art Gallery moved within The Hague to the Buitenhof.

In 1806, the Kingdom of Holland was established by Napoleon Bonaparte. On the orders of king Louis Bonaparte, brother of Napoleon, the museum moved to Amsterdam in 1808. The paintings owned by that city, such as The Night Watch by Rembrandt, became part of the collection. In 1809, the museum opened its doors in the Royal Palace in Amsterdam.

In 1863, there was a design contest for a new building for the Rijksmuseum, but none of the submissions was considered to be of sufficient quality. Pierre Cuypers also participated in the contest and his submission reached the second place.

In 1876 a new contest was held and this time Pierre Cuypers won. The design was a combination of gothic and renaissance elements. The construction began on 1 October 1876. On both the inside and the outside, the building was richly decorated with references to Dutch art history. Another contest was held for these decorations. The winners were B. van Hove and J.F. Vermeylen for the sculptures, G. Sturm for the tile tableaus and painting and W.F. Dixon for the stained glass. The museum was opened at its new location on 13 July 1885.

In 1890 a new building was added a short distance to the south-west of the Rijksmuseum. As the building was made out of fragments of demolished buildings, that together give an overview of the history of Dutch architecture, it has come to be known informally as the 'fragment building'. It is also known as the 'south wing', and is currently (in 2013) branded the Philips Wing.

In 1906 the hall for the Night Watch was rebuilt. In the interior more changes were made, between the 1920s and 1950s most multi-coloured wall decorations were painted over. In the 1960s exposition rooms and several floors were built into the two courtyards. 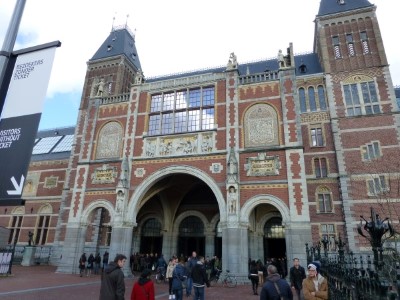 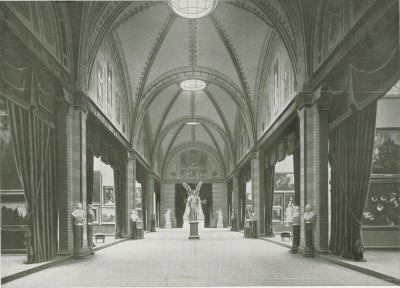 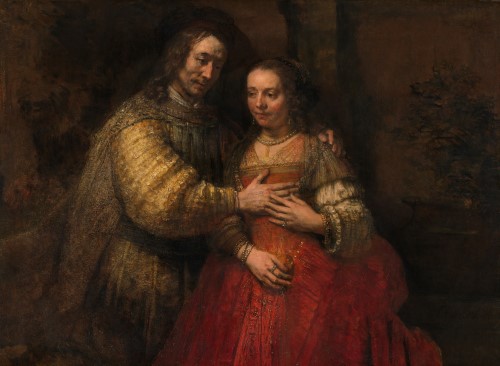