Until the first Philharmonic concert on March 28, 1842, the city which gave its name to the Viennese classics - Joseph Haydn (1732-1809), Wolfgang Amadeus Mozart (1756-1791) and Ludwig van Beethoven (1770-1827) - had no professional concert orchestra. Concerts of symphonic works were played by ensembles specially assembled for the occasion. Orchestras composed entirely of professional musicians were found only in the theaters.

The logical step of playing a concert with one of these orchestras was taken at the end of the 18th century, when Wolfgang Amadeus Mozart engaged the orchestra of the Vienna Court Theater for a cycle of six concerts in 1785. Ludwig van Beethoven also engaged this ensemble on 02-04-1800 for a concert in which he premiered his first symphony. On 24-05-1824 the orchestra of the Gesellschaft der Musikfreunde (Society of the Friends of Music) and the court orchestra joined forces with the court opera orchestra for the premiere of Beethoven's Ninth Symphony. Despite these promising beginnings, however, the largest and finest ensemble in Vienna only managed to become an organizer of classical symphonic concerts in a very roundabout way. The Bavarian composer and conductor Franz Lachner, conductor at the court opera theater from 1830, played symphonies by Beethoven in the intervals of ballet performances. From these experiments to the court opera orchestra's first entrepreneurial activities was only a small step, and in 1833 Lachner founded the Künstler-Verein for this purpose. However, the society disbanded after only four concerts due to organizational shortcomings.

Otto Nicolai was appointed conductor at the Kärntertortheater in 1841. Encouraged by influential figures of Vienna's musical life, he revived Lachner's idea and on March 28, 1842 conducted a "Grand Concert" in the Großer Redoutensaal which was presented by "all the orchestra members of the imperial "Hof-Operntheater". This "Philharmonic Academy", as it was originally called, is rightly regarded as the origin of the orchestra, because all the principles of the "Philharmonic Idea", which still apply today, were put into practice for the first time:

Thus, even before the political events of 1848, a revolutionary policy was adopted - democratic self-determination and entrepreneurial initiative undertaken by an orchestra as a partnership - which laid the foundations for technically and musically superior performances of classical symphonic works. Of course, this was only the beginning. The association of musicians would suffer serious setbacks and learn painful lessons before it finally achieved true stability.

There has been no other conductor in the history of the Vienna Philharmonic who left such a long-lasting impression on the orchestra as Hans Richter, the legendary conductor of the premiere of Wagner's tetralogy "The Ring of the Nibelungen" in Bayreuth. This is not only an appraisal in hindsight, but was also the predominant opinion of the musicians of that time. Richter conducted at least 243 concerts and presided over the organization with a one-year interruption from 1875 - 1898.

The artistic partnership between Richter and the Philharmonic was characterized by the fervor of individuals of flesh and blood. The era of Hans Richter, which is referred to as the 'Golden Era' was not a time of static complacency, but rather the constant give-and-take between a headstrong group of musicians and an outstanding conductor, who was in fact a member of the ensemble as the first among equals.

Under Hans Richter the ensemble attained the status of a world class orchestra with an incomparable tradition. Also contributing to this aura were encounters with Wagner, Verdi, Bruckner, Brahms, Liszt and others who performed with the orchestra as conductors and soloists. During the 'Golden Era' of Hans Richter Brahms' 2nd and 3rd Symphonies, Anton Bruckner's 4th and 8th Symphonies as well as the Tchaikovsky Violin Concerto were premiered.

Gustav Mahler assumed the direction of the VPO subscription concerts in the Year 1898, one year after being named director of the Vienna Court Opera. Mahler nog only led the orchestra to numerous artistic successes, but also on its first foreign tour to Paris in 1900. 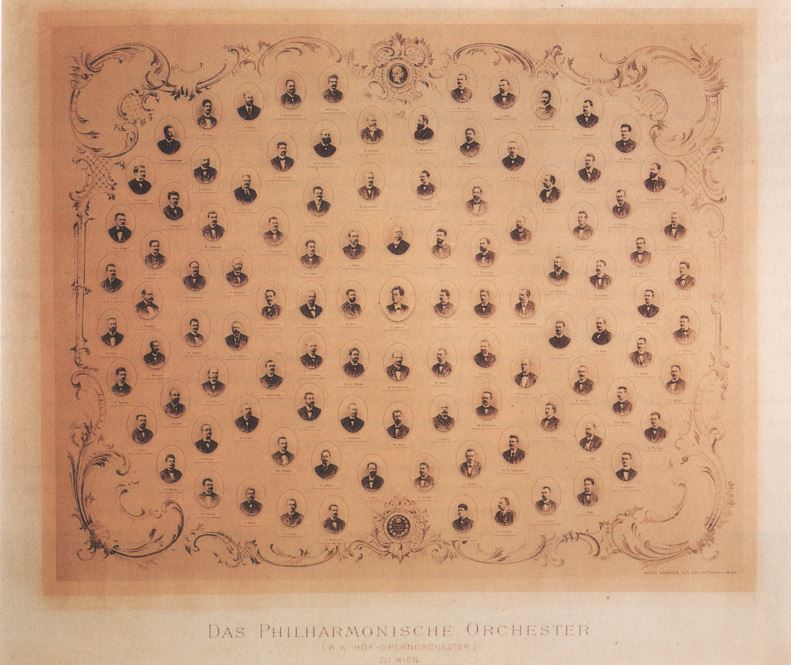 "The burdens of directorship of the Opera, as well as the psychologically difficult situation, as Philharmonic subscription conductor, dependent on the democratic decision-making process of the same musicians who in the opera were his subordinates, led Mahler to resign the direction of the concerts in 1901" (Clemens Hellsberg).

Nevertheless, the mutual collaboration between Mahler and the VPO lasted until 1907.

During his short era, Mahler conducted 22 subscription concerts in which 68 compositions by 24 different composers, 18 of which were premieres. Even though he often presented contemporary compositions on these concerts, his program selections were generally conservative, with strong emphasis placed on the symphonies of Ludwig van Beethoven.

In 1901, Mahler conducted the premiere of compositions from his younger years, "Das klagende Lied (The song of Lamentation)". In 1905, he conducted the premiere of his "Kindertotenlieder (Songs on the Death of Children)", and in the same year the first performance of his Symphony No. 5. At his farewell concert in Vienna on 24-11-1907, Mahler stood at the podium of the VPO for the last time, to conduct his Symphony No. 2.

"After traveling so much and having had the opportunity to hear the world's foremost orchestra, one always has the impression when arriving back in Vienna that our orchestra towers far above all others" 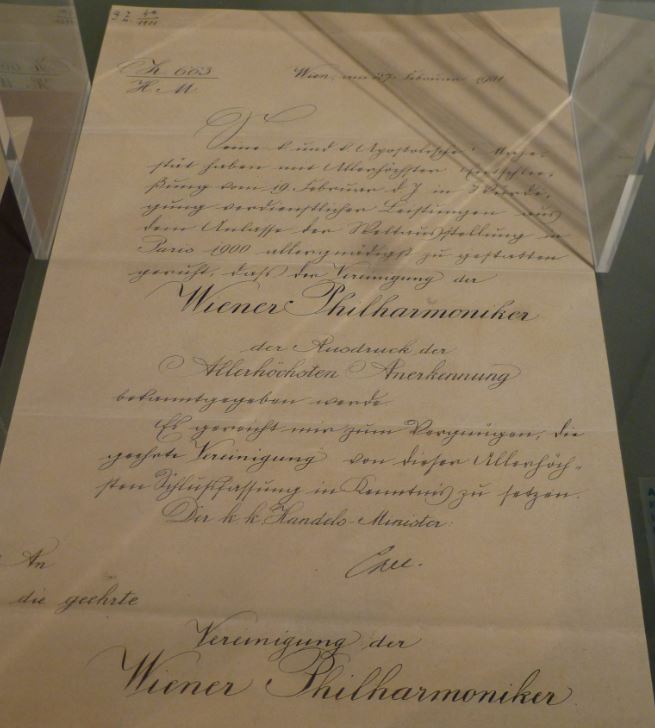 Year 1900. Letter of appreciation from Franz Josef I, Emperor (1830-1916) to the Vienna Philharmonic Orchestra (VPO). In this letter, Emperor Franz Joseph thanks the VPO for its performance on tour in Paris. Even during this first international engagement, the musicians performed their unofficial role as Austria's cultural ambassadors. Each musician who at the time had been in the service of the Court Opera for at least ten years was awarded the honorory title "Imperial Court Musician'. The Vienna Philharmonic performed abroad for the first time at the World Exhibition in Paris in 1900 with Gustav Mahler (1860-1911) conducting.

The orchestra, officially recognized by the Austrian government as an association in 1908, did not start touring with any regularity until 1922 under Felix von Weingartner, who led the orchestra as far afield as South America.

The Philharmonic's close relationship to Richard Strauss, of course, is of great historical importance, and represents one of the many high points in the rich history of the orchestra.

Further musical highlights were artistic collaborations with Arturo Toscanini from 1933 to 1937, and Wilhelm Furtwängler (1886-1954) who, despite the departure from the one subscription concert conductor system, was in actuality the main conductor of the orchestra from 1933 to 1945, and again from 1947 to 1954. 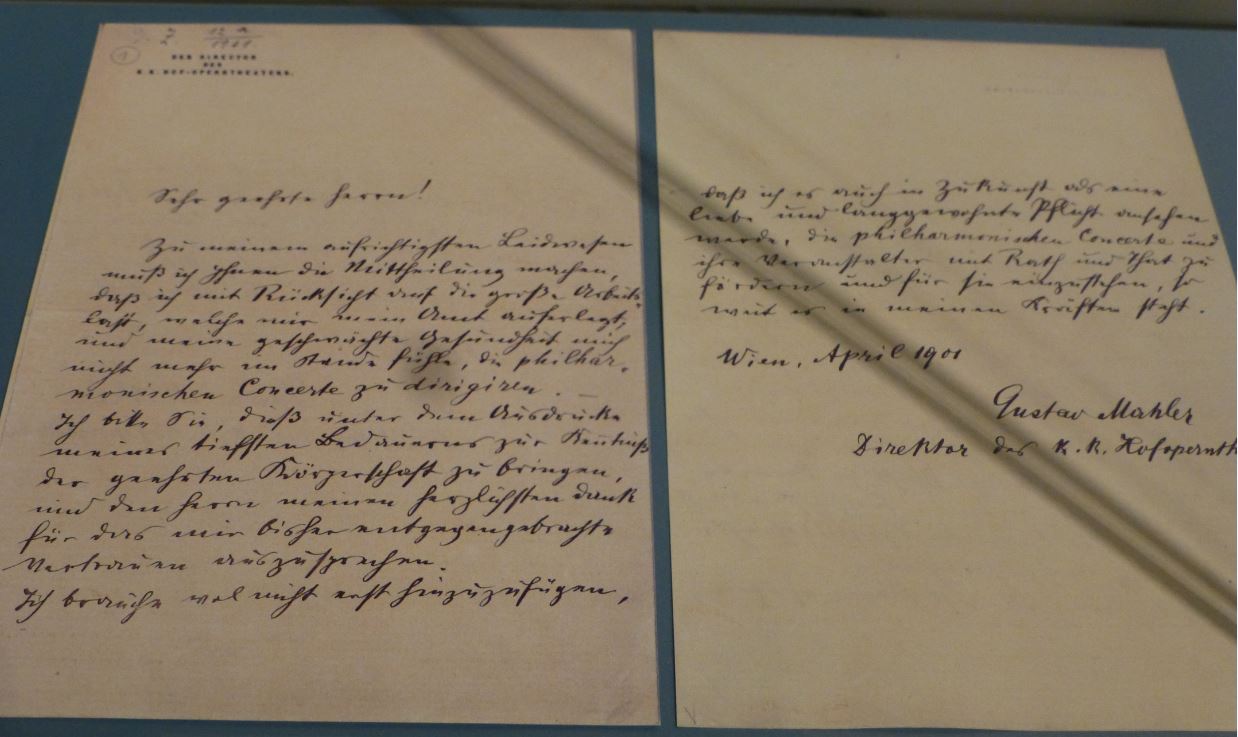 Year 1901. April. Letter from Gustav Mahler to the Vienna Philharmonic Orchestra (VPO). In this letter, Gustav Mahler informs the musicians of his decision to relinquish his position as conductor of the VPO subscription concerts. Neither the artistic collaboration nor the mutual esteem between Mahler and the Philharmonic came to an end as a result of this development.

Some of these annual hirings were renewed for many years, others lasted only for a few years. At the same time the Vienna Philharmonic also worked with other conductors, e. g. at the Salzburg Festival, for recordings or special occasions. With the widening of the Philharmonic's activities the orchestra decided to abandon this system in 1933. From then on there were only guest conductors hired for each concert, both in Vienna and elsewhere. See: Gesellschaft der Musikfreunde (Musikverein, Musikvereinsplatz No. 1).