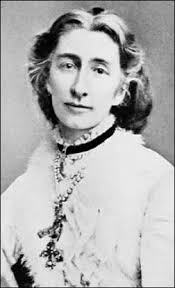 Cosima Wagner (born Francesca Gaetana Cosima Liszt) was the daughter of the Hungarian pianist and composer Franz Liszt. She became the second wife of the German composer Richard Wagner, and with him founded the Bayreuth Festival as a showcase for his stage works; after his death she devoted the rest of her life to the promotion of his music and philosophy. Commentators have recognised Cosima as the principal inspiration for Wagner's later works, particularly Parsifal.

In 1857, after a childhood largely spent under the care of her grandmother and with governesses, Cosima married the conductor Hans von Bulow (1830-1894). Although the marriage produced two children, it was largely a loveless union, and in 1863 Cosima began a relationship with Wagner, who was 24 years her senior. She married him in 1870; after his death in 1883 she directed the Bayreuth Festival for more than 20 years, increasing its repertoire to form the Bayreuth canon of ten operas and establishing the festival as a major event in the world of musical theatre.

During her directorship, Cosima opposed theatrical innovations and adhered closely to Wagner's original productions of his works, an approach continued by her successors long after her retirement in 1907. She shared Wagner's convictions of German cultural and racial superiority, and under her influence, Bayreuth became increasingly identified with antisemitism. This was a defining feature of Bayreuth for decades, into the Nazi era which closely followed her death in 1930. Thus, although she is widely perceived as the saviour of the festival, her legacy remains controversial.

In January 1833 the 21-year-old Hungarian pianist and composer Franz Liszt met Marie d'Agoult, a Parisian socialite six years his senior. Marie's antecedents were mixed; her German mother, from a prominent Frankfurt banking family, had married a French nobleman, the Comte de Flavigny. Marie had been married since 1827 to Charles, Comte d'Agoult, and had borne him two daughters, but the union had become sterile. Drawn together by their mutual intellectual interests, Marie and Liszt embarked on a passionate relationship. In March 1835 the couple fled Paris for Switzerland; ignoring the scandal they left in their wake, they settled in Geneva where, on 18 December, Marie gave birth to a daughter, Blandine-Rachel.

In the following two years Liszt and Marie travelled widely in pursuit of his career as a concert pianist. Late in 1837, when Marie was heavily pregnant with their second child, the couple were at Como in Italy. Here, on 24 December in a lakeside hotel in Bellagio, a second daughter was born. They named her Francesca Gaetana Cosima, the unusual third name being derived from St Cosmas, a patron saint of physicians and apothecaries; it was as "Cosima" that the child became known. With her sister she was left in the care of wet nurses (a common practice at the time), while Liszt and Marie continued to travel in Europe. Their third child and only son, Daniel, was born on 9 May 1839 in Venice.

In 1839, while Liszt continued his travels, Marie took the social risk of returning to Paris with her daughters. Her hopes of recovering her status in the city were dented when her influential mother, Madame de Flavigny, refused to acknowledge the children; Marie would not be accepted socially while her daughters were clearly in evidence. Liszt's solution was to remove the girls from Marie and place them with his mother, Anna Liszt, in her Paris home while Daniel remained with nurses in Venice. By this means, both Marie and Liszt could continue their independent lives.

Relations between the couple cooled, and by 1841 they were seeing little of each other; it is likely that both engaged in other affairs. By 1845 the breach between them was such that they were communicating only through third parties. Liszt forbade contact between mother and daughters; Marie accused him of attempting to steal "the fruits of a mother's womb", while Liszt insisted on his sole right to decide the children's future. Marie threatened to fight him "like a lioness", but soon gave up the struggle, perhaps valuing the preservation of her social status above her duties as a mother. Though they were living in the same city, she did not see either of her daughters for five years, until 1850.

Cosima and Blandine remained with Anna Liszt until 1850, joined eventually by Daniel. Cosima's biographer George Marek describes Anna as "a simple, uneducated, unworldly but warmhearted woman ... for the first time [the girls] experienced what it was to be touched by love". Of the sisters, Blandine was evidently the prettier; Cosima, with her long nose and wide mouth was described as an "ugly duckling". Although Liszt's relations with his children were formal and distant, he provided for them liberally, and ensured that they were well educated. Both girls were sent to Madame Bernard's, an exclusive boarding school, while Daniel was prepared for the prestigious Lycée Bonaparte.

In 1847 Liszt met Princess Carolyne zu Sayn-Wittgenstein, the estranged wife of a Russian prince. By the autumn of 1848 she and Liszt had become lovers, and their relationship lasted for the remainder of his life. She quickly assumed responsibility for the management of every aspect of Liszt's life, which extended to the upbringing of his daughters. Early in 1850 Liszt had been disturbed to learn that Blandine and Cosima were seeing their mother again; his response, guided by the princess, was to remove them from their school and place them into the full-time care of Carolyne's old governess, the 72-year-old Madame Patersi de Fossombroni. Liszt's instructions were clear—Madame Patersi was to control every aspect of the girls' lives: "She alone is to decide what is to be permitted them and what forbidden".

As his daughters approached womanhood, Liszt felt that a change in their lives was called for and he arranged (over their mother's bitter protests) for them to move to Berlin. Here they were placed in the care of Franziska von Bülow, whose son Hans was Liszt's most outstanding pupil; he would take charge of the girls' musical education while Frau von Bülow supervised their general and moral welfare. Hans von Bülow, born in 1830, had abandoned his legal education after hearing Liszt conduct the premiere of Wagner's Lohengrin at Weimar in August 1850, and had decided to dedicate his life to music. After a brief spell conducting in small opera houses, Bülow studied with Liszt, who was convinced that he would become a great concert pianist. Bülow was quickly impressed by Cosima's own skill as a pianist, in which he saw the stamp of her father, and the pair developed romantic feelings for each other. Liszt approved the match, and the marriage took place at St. Hedwig's Cathedral, Berlin, on 18 August 1857. During their honeymoon, along with Liszt they visited Wagner at his home near Zurich. This visit was repeated the following year, when Cosima, on taking her leave, shocked Wagner with an emotional demonstration: "[S]he fell at my feet, covered my hands with tears and kisses ... I pondered the mystery, without being able to solve it".

Cosima, a Parisian by upbringing, found it hard to adjust to life in Berlin, which was then a more provincial city than Paris. Her attempts to mix with local society, according to Marie zu Sayn-Wittgenstein, were handicapped by "[h]er exaggerated self-esteem and innate causticity", which alienated the men and women in her circle. At least initially, Cosima took an interest in her husband's career, encouraging him to extend his activities into composition. On one occasion she provided him with a scenario she had written for an opera based on the story of Merlin, court magician to King Arthur. However, nothing came of this project. Bülow's crowded professional schedule left Cosima alone for long periods, during which she worked for the French-language magazine Revue germanique as a translator and contributor.

In December 1859 she was saddened by the death of her brother Daniel, at the age of twenty, after a long wasting illness. Cosima's first child, a daughter born on 12 October 1860, was named Daniela in Daniel's memory. A further, unexpected blow for Cosima fell in September 1862, when her sister Blandine, who had shared much of her upbringing, died in childbirth—she had been married to Émile Ollivier, a Parisian lawyer, since October 1857. Cosima's second daughter, born in March 1863, was named Blandina Elisabeth Veronica.

Bülow was committed to Wagner's music; in 1858 he had undertaken the preparation of a vocal score for Tristan und Isolde, and by 1862 he was making a fair copy of Die Meistersinger von Nürnberg. A social relationship developed, and during the summer of 1862 the Bülows stayed with Wagner at the composer's home at Biebrich. Wagner records that Cosima became "transfigured" by his rendering of "Wotan's Farewell" from Die Walküre. In October 1862, just after Blandine's death, Wagner and Bülow shared conducting duties at a concert in Leipzig; Wagner records that, during a rehearsal, "I felt utterly transported by the sight of Cosima ... she appeared to me as if stepping from another world". In these years Wagner's emotional life was in disarray. He was still married to his first wife, Minna Planer (she was to die in 1866), and was involved in several extramarital relationships. On 28 November 1863 Wagner visited Berlin; while Bülow was rehearsing a concert, Wagner and Cosima took a long cab ride through Berlin and declared their feelings for each other: "with tears and sobs", Wagner later wrote, "we sealed our confession to belong to each other alone".

Blandine and Cosima were subjected to the Patersi curriculum for four years. Cosima's biographer Olive Hilmes likens the regime to that used for breaking in horses, though Marek describes it as exacting but ultimately beneficial to Cosima: "Above all, Patersi taught her how a 'noble lady' must behave, how to alight from a carriage, how to enter a drawing room, how to greet a duchess as against a commoner ... and how not to betray herself when she was hurt". On 10 October 1853 Liszt arrived at the Patersi apartment, his first visit to his daughters since 1845. With him were two fellow-composers: Hector Berlioz and Richard Wagner. Carolyne's daughter Marie, who was present, described Cosima's appearance as "in the worst phase of adolescence, tall and angular, sallow ... the image of her father. Only her long golden hair, of unusual sheen, was beautiful". After a family meal, Wagner read to the group from his text for the final act of what was to become Götterdämmerung. Cosima seems to have made little impression on him; in his memoirs he merely recorded that both girls were very shy. 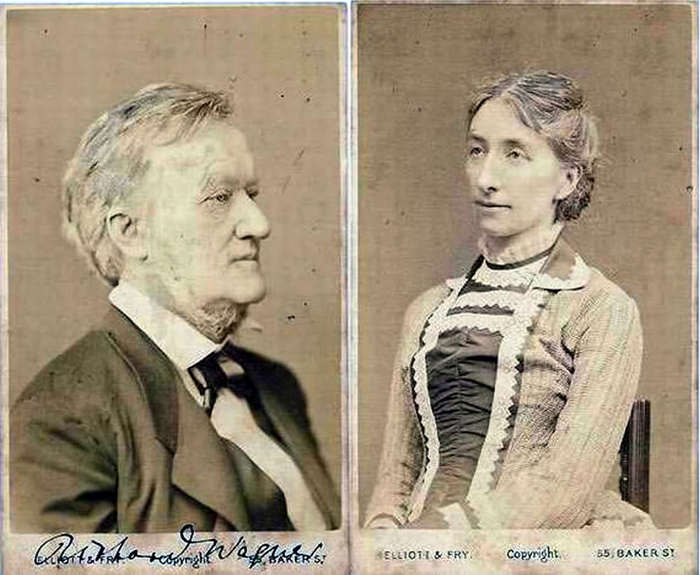 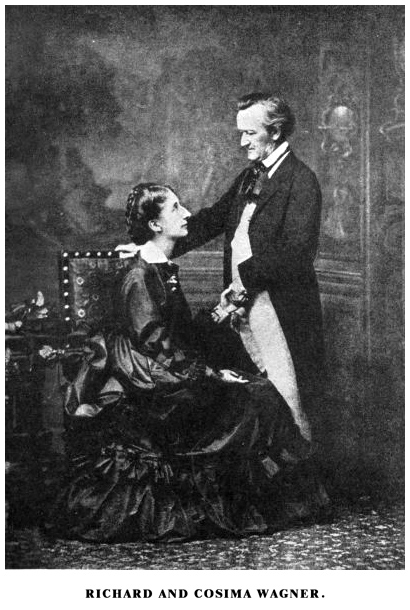