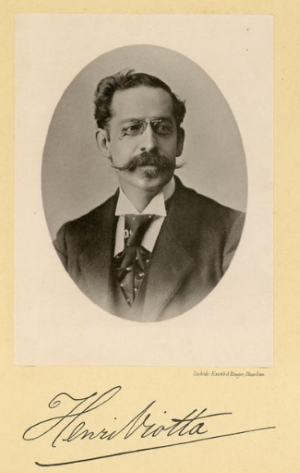 Henricus Anastasius (Henri) Viotta was a Dutch composer and conductor. He was the founder and first conductor of the Residentie Orkest. He was also a lawyer.

Viotta came from a musical family. His father, the physician-musician J.J. Viotta, was the composer of many now familiar songs texts by J.P. Heije. Henri Viotta first received music education from his father, attended the music school of Wilhelmus Smits and took early part in the study of operas. When he was ten he heard Tannhäuser from Richard Wagner (1813-1883) for the first time and made it deep impression.

In the years 1864 and 1865 he studied cello and piano at the Conservatory of Cologne. He taught music for a few years, but enrolled in 1871 at the University of Leiden (the Netherlands) to study law. He conducted a performance of the Mass composed by him and composed the Festival March for a lustrum of the University.

In 1876 Viotta visited it first Bühnenfestspiel in Bayreuth and saw the premiere of Der Ring des Nibelungen, which led to a detailed essay about Wagner in 'De Gids' (The Guide). He also continued his studies and obtained his doctorate in 1877 on the dissertation The copyright of the composer.

Viotta wrote the music drama The Seven Ravens. Only 'The Voorspel and a Wedding March' have been preserved.

In 1878 he became, after he had conducted a concert of the Vereniging Amstels Mannenkoor (choir), he was asked for the function of director of this association. Viotta, however, remained for the time being in his decision to practice art exclusively as a hobby and was admitted as a lawyer, registered in Amsterdam.

In addition, he published musical reports in the newspaper Het Noorden, later in the Amsterdam Courant. Viotta also published essays in De Gids and Caecilia and was approached by the publishers Roothaan and Bührman to create a Lexicon of Art edit (1879-1885).

Following the death of Wagner, on February 13, 1883, he wrote the biography Richard Wagner, his life and his works. In the same year he founded the Wagner association, of which he became director. The aim of the association was to promote the new German School, in particular that of Wagner and Franz Liszt and also some of Hector Berlioz's works.

The Wagner Association regularly organized performances of operas by Wagner, usually with Viotta as conductor. In 1905 he conducted, for example, the first European performance of Parsifal outside Bayreuth. That was a controversial act, since Cosima Wagner, the composer's widow, had banned performances outside that city.

In the Dutch music world of those days, which was dominated by a conservative composer like Johannes Verhulst, who did not like Wagner, Liszt and Berlioz, Viotta was a pioneer for the new music. The recognition of these composers in the Netherlands, is due to the work of Viotta.

In 1886 Viotta was elected as director of the singing association Excelsior. Under his direction, works by Berlioz as La damnation de Faust, Messe des Morts and Roméo et Juliette, of Vincent d'Indy as Le chant de la cloche and of Peter Benoit as Lucifer.

In 1889 Viotta was elected as director of the Caecilia Company. In that year he also founded the Monthly Magazine for Music, in which he wrote the ideas of the 'new art' in general and the ideas of Wagner in particular. The magazine was published only for five full year.

In addition, he became a musical employee of De Telegraaf and acted as permanent employee of De Gids. In the years 1893-1896 he published the brochure series on contemporary artists (at Van Holkema & Warendorf). Heroes of music appeared in 1900 with H.D. Tjeenk Willink & Son in Haarlem with 32 portraits of composers. 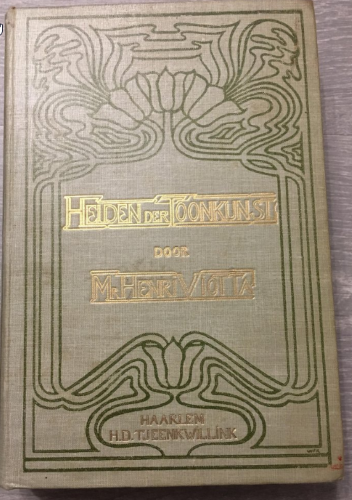 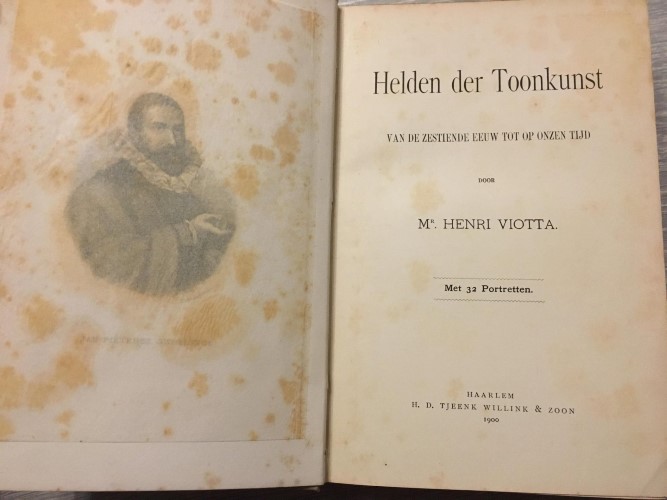 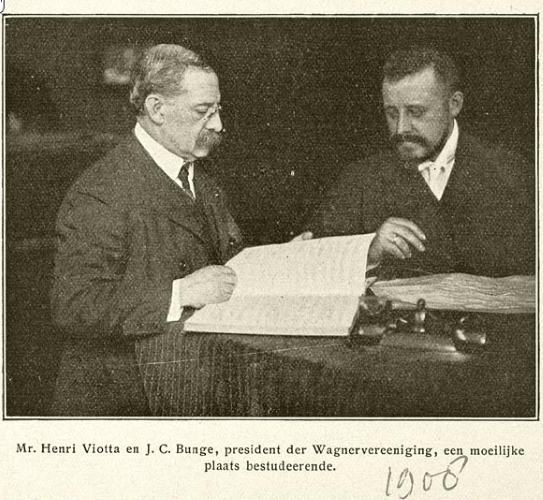 Viotta was director of the Royal Conservatory from 1896 to 1919 and was in 1904 the founder of the Residentie Orkest, of which he remained conductor and director until 1917. In 1919, Viotta ended all his functions down. In 1920 he settled in Clarens in Switzerland. Between 1920 and 1925 he edited from Switzerland a monthly magazine for music under the name Kunst.

Later he moved to Montreux, where he died in 1933. Viotta was married twice and had one son from his first marriage.