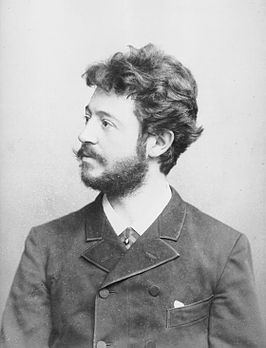 Petri comes from a musical family. His father was an oboist in the urban orchestra of Utrecht, his cousin Willem Petri (1865-1950) was organist, pianist and music pedagogue and another cousin Martinus Petri (1853-1924) was also a violinist and conductor. He received violin lessons and after the death of his father by the concertmaster Dahmen of the Utrechts Stedelijk Orkest. From 1871 to 1874 he studied with Joseph Joachim in Berlin. Presumably he then studied with Henri Vieuxtemps at the Royal Conservatory in Brussels.

In 1877 he provided a solo performance in London. From 1877 to 1881 he was then concertmaster at the Fürstliche Hofkapelle Sondershausen and from 1881 to 1882 in Hanover. From October 1882 he was concertmaster of the well-known Gewandhausorchester in Leipzig. In this function he remained until 1889 and then changed himself to the function as Royal Saxon concert master (Königlich Sächsischer Konzertmeister) to the Dresdner Hofkapelle, as the current Staatskapelle Dresden was then still called.

In Dresden he was also a lecturer at the Hochschule für Musik Carl Maria von Weber Dresden. Among his students included the conductor Willem Mengelberg (1871-1951), the composer Gustav Carl Luders, the composer Margarethe Stern, the composer Dora Pejačević, the composer and conductor Arno Starck and the violinist Franz Spiess.

He worked as a violinist in various chamber music ensembles. Together with Bolland, Thümer and Klengel (later A. Schröder) he formed the Gewandhaus Quartett in Leipzig. In Dresden he founded his own Petriquartett together with Erdmann Warwas (violin), Alfred Spitzner (viola) and Georg Wille (cello). There is a portrait of this string quartet painted in 1907 by Robert Sterl.

As an arranger he wrote a large number of adaptations for his instrument, the violin. He also wrote his own works as a composer. Petri became friends with Ferruccio Busoni. He wore his both his 2nd string quartet and the violin concerto, whose premiere he provided in 1897 with the Berliner Philharmoniker under the direction of Busoni himself.

More
After having received violin lessons from his father, Henri Wilhelm Petri became a student of S. Dahmen in Utrecht. Thanks to a scholarship from King William III, he got the opportunity to study violin from 1871 at Joseph Joachim in Berlin. He was also a pupil of Henri Vieuxtemps for a short time in Brussels.

Petri studied with Joachim until 1876, when he accompanied him to London, where he performed successfully.

From 1877 he was the concertmaster of the court orchestra in Sondershausen for four years. From 1881 to 1883 conductor of the Royal Theater in Hanover. Afterwards he was leader of the Leipziger Gewandhaus Orchestra for six years and since 1989 he was concertmaster of the Hoforkest in Dresden.

In addition to his work as a court chaplain, Petri was, from 1903, nine years as head teacher for violin at the conservatory in Dresden.

Petri was also the primarius of a string quartet with A. Spitzner, E. Warwas and G. Wille. The string quartet went on tour to a number of European countries and annually gave a series of concerts in Dresden.