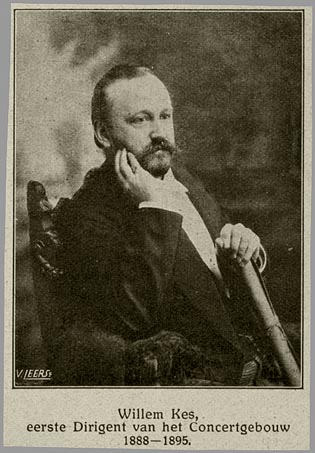 Willem Kes was a Dutch conductor and violinist. He was the first principal conductor of the Royal Concertgebouw Orchestra (RCO/KCO) of Amsterdam, holding that position from 1888 to 1895.

Kes brought his musicians a strict discipline. Who came too late to rehearsals, could count on a fine and musicians who played badly, had to stay after school and in the boardroom rehearse their parties. He also demanded from the public silence during performances, and forbade the consumption of refreshments during rehearsals and concerts, which at that time was not yet public.

Led by Kes the Concertgebouw Orchestra grew to international fame. In 1891 he introduced Don Juan by Richard Strauss in the Netherlands and a year later Macbeth.

When Kes in 1895 retired to take up employment with the Scottish Orchestra in Glasgow, his successor Willem Mengelberg played piano during the farewell concert. Mengelberg got the lead a very disciplined orchestra, which grew under his leadership to one of the best orchestras in the world.

Kes left the Concertgebouw Orchestra to take up a conducting post with the Scottish Orchestra in Glasgow. From 1905 to 1926, Kes was director of a music conservatory in Koblenz.